From the successful networking wine tasting event that happened in April it was decided
we would hold another one. It was held last week on Thursday 7th July at the Riverside Inn Cheddar. Many business’s are aware of the Riverside Inn as it is home to a Business Club that meets there fortnightly.

When I say we, it was in collaboration with Darly from Lending Services and Keith from
Lightside.

The purpose of the evening is to network while tasting wine so if you like wine and
networking its a pretty good evening for you!

I chose European wine as a theme for the tasting and started with an English wine, Oatleys
award winning Janes 2009. People really enjoyed this wine which of course I had no doubt they would. We then went on to the Loire Valley, but chose a wine made from an indigenous white grape Grolleau Gris made by Nicolas Choblet at Domaine du Haut Bourg. Really fresh, zesty and a fabulous match to fish, what makes it even better is that
its great value for money at £7.99*.

For the last white I decided to go to Portugal in the Alentejo region which is famous for
its cork supply. This wine is a blend of regional grape varieties including Antao Vaz and Roupeiro giving this wine an intense aromatic nose, with richness of spicy tropical fruit and refreshing acidity.

The reds began with Chateau Eulalie from Minervois in the Langudoc region, an area that
is sometimes overlooked but yet so much going on! We then travelled to the heel of Italy to taste the Primitivo grape which is also known as Zinfandel in California, this showed lots of red fruits of raspberries and cherries. The final red was again in the southern part of the country but we had moved to Spain to Almansa to taste Marius Reserve. The main grape in this blend is Monastrell which is indigenous to Spain and is known as Mourvedre in France.

A blind wine challenge was presented to put the guests taste buds to the test! There was a
bottle of Nino Franco’s Prosecco to win so the stakes were high! They had to chose the correct grape and country to be entered in to the draw.

The wine was Talmard Macon Chardonny and the luck winner was Graham Ross from Pier IT. 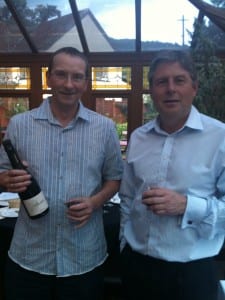 Daryl with the winning man Graham Ross from Pier IT

The purpose for showing this wine blind was to try and rid the negative perception people may have of Chardonnay by showing a creamy buttery rounded wine.