There is a wine region set in one of the most famous areas of wine making, but
yet its had to change its name so that consumers understand exactly
where it is located. The area once known as Cotes de Castillon is now
known as Castillon Cotes de Bordeaux. Castillon is neighbours to the
very famous Saint Emilion.

Spread over nine villages it has 360 winegrowers, the landscape has hillsides of
clay-limestone and at the foot of the hills you’ll find sand and fine
gravel. The grapes are the same of that of Bordeaux, merlot being the
dominant grape followed by cabernet franc and cabernet sauvignon.

I attended a tasting on Monday hosted by the Le Maitre de la Commanderie de
Bordeuax held at the Clifton Club in Bristol,I felt that this was a
great way to start the week and I have to say the wines did not
disappoint.

What I loved most was being able to talk direct to the winemakers which allowed
you to get a better understanding of the wine. Three producers stood
out for me with their wine and passion these were Château La Roche
Mezieres, Château Fontbaube and Chateau Terrasson, two of which
don’t export to the UK as yet, so I hope that someone will pick up on
them and bring them to our shelves. 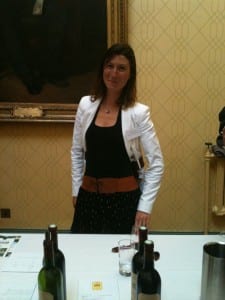 Chateau La Roche is owned by the Augereau family and I met with the daughter who
is also the winemaker. I tasted the 2006 which was a blend of 75%
merlot 20% cabernet sauvignon and 5% cabernet franc from vines aged
35 – 60 years. Its been aged in stainless steel and concrete vats
which gives this wine gorgeous aromas of fresh red fruits and
violets, opening up on the palate to black cherries and plums with
good firm tannins and well balanced acidity.

What I think is great is
that no oak was used but still has the power and structure you would
expect from a Bordeaux wine.

Chateau Fontbaude was showing three of their wines, the 2008 and 2009 aged in
cement vats and  a 2009 aged in oak for 12 months. The 2008 was
lovely and fresh with great acidity good length and lots of red
fruits and plums. The cement aged 2009 showed more concentration of
black fruit, spice and a medicinal notes. The barrel aged 2009 shows
great ageing potential with firm tannins and  intense black fruits.
The blend of grapes are merlot dominated with cabernet franc. 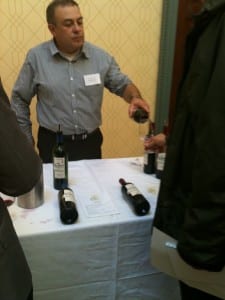 Chateau Terrasson are a husband and wife team who are located in a northern
village of  Monbadon. With 30 year old vines on clay limestone soil
they produce balanced wines with superb length. The 2007 was more
fruit driven with plums, black fruits and sweet spice where as the
2008 showed more vegatal notes and violets. Both of which I enjoyed.

It was here talking with Christophe that I found out about the name change and
why. He told me that when he spoke of Castillon to people outside of
France they would associated it with Spain. Which as you can imagine would be very frustrating. 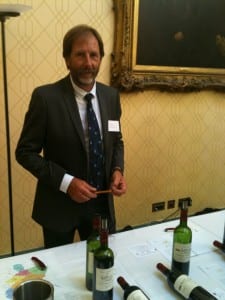 The tasting was thoroughly enjoyable and reaffirms why I love the world of wine,
continually shown areas of the world that are over shadowed by bigger
names, meeting the winemakers, seeing the passion, seeing the soil
ingrained on their fingers.

Oh, and not forgetting the Somerset Cheese Company! Showing a delicious range of cows and goats cheese!