The scene was set in the medieval square of Axbridge for a day and night of food, wine, fun and activities. The sun was shining, church bells ringing and people setting up their stalls for a Somerset Showcase 2011. I suddenly felt I was in an episode of Midsomer Murders and detective inspector Barnaby was going to be along soon to ask his questions! 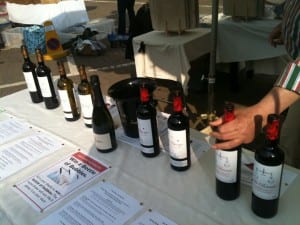 9am and the wine is open!

In the Town Hall they had set up an “Allo Allo” themed café which meant we had lots of characters from the TV sit com running around the square throughout the day. We may not have got inspector Barnaby but we did an officer of sorts to stop for a taste! 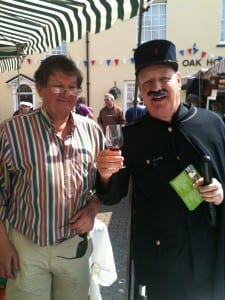 The day was buzzing from the outset which was great to be part of. Tim and I opened the wine we were showing for that day. We had decided to go with a range of Spanish wines from La Bascula which some of you may remember from an earlier blog. 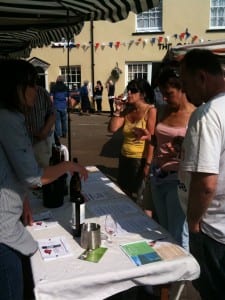 Wine tasting away the afternoon… Perfect 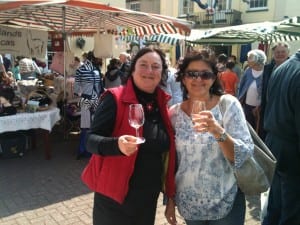 Turret Fields – Monastrell and Syrah 2008, D.O Jumilla.Bronze medal wine awards 2009. A serious wine that can age for another few years at least. The raisin character of the Monastrell is matched by the spice of the Syrah, all enhanced and rounded off by its spell in oak.

We also gave the chance to win a bottle of Nino Franco Prosecco by putting your name in to the hat. The Lucky winner pulled out was Louise Nelson Smith.

We had a great day met lots of lovely people made new contacts and the photos show that everyone was in good spirits. Thank you to the Axbridge Chamber Of Commerce for hosting the event.

And don’t forget if you didn’t get to order your wine on the day then contact Kelli on 01934 853574 or email kelli@thewinetastingco.com

One Response to “What happened at the Somerset Showcase 2011”