On a sunny Monday morning, what better way to start the week than with a tour of the Somerset Brandy Company.

The company is owned by Julian Temperley and he very much plays an integral role in the company. Tasting the cider, blending the brandy with Tim Edwards the head distiller, to make sure the product reaches the continual high standard.

They grow 40 varieties of apples on 150 acres set on Burrow Hill, Somerset.

Tim kindly allowed me to sit in with him while he was working and talked me through the process of the production of their cider and cider brandy. Watching him work the two continuous stills was fascinating, Tim kept referring to them as the girls, I then discovered they both had names, Fifi and Josephine! Tim assured me that what he was doing wasn’t complicated, however, from where I was sat he was up and down adjusting the pressure, time watching and recording all that he did, it looked pretty full on to me! He went on to to say that the real art is in when they come to do the blending. 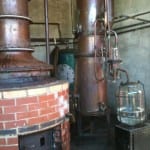 Tim explained about the growing of cider apples and that they grow on a certain type of soil which is permian triassic, sandstone based. Vintage cider apples are even more picky on where they grow and are found in three places throughout Somerset, Burrow Hill being one, Wedmore and Baltonsborough. There was me thinking cider apples could be grown anywhere.

In the fermentation they chose to allow the wild yeasts to be used rather than using inoculated yeasts, this makes this cider a much more natural product and again being unique to where the apples are grown. 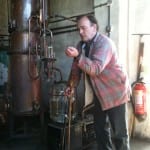 They of course use there own cider to make the brandy and use a whooping 15,000 litres of cider a day when distilling.

There are two ways in which to distill, either pot or continuous and they use both, but Tim prefers continuous as he feels you get a cleaner spirit with all the aromas and character. The stills are generated by furnaces underneath the still, the heat generated by them is immense and with the sun coming in it gets seriously hot. 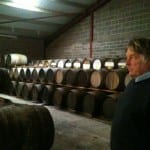 Julian and the ageing brandies

As Tim was busy with the distills Julian kindly showed me around the bond where they age the brandies. It really is beautiful to see so many old barrels just sat happily ageing the brandy. I felt a really sense of calm in there, this wasn’t a place to rush anything everything happened in its own time and would be ready as and when.

While I there I tasted the cider and without sounding biased, it was one of the best ciders I ever tasted, growing up in the West Country I’ve tried a few!

I then went on to taste Somerset Pomona, which is really tasty, you think it will be sweet but the finish is dry. Apparently great with cheese and as I’ve got friends coming for dinner in the next couple of weeks, what better way to test this.

The Kingstone Black is sweeter in style using the finest rarest vintage apples and comes in at 18% abv, a really treat for those with a sweet toothed. I then went on to taste the Shipwrecked and the Somerset 10 year old. Both well structured, the Shipwrecked showed more prominent oak character and really smooth and the 10 year old had the traditional rich apply fruit. 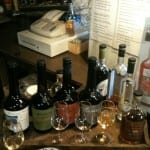 Watching Tim, Julian and everyone work you really get an appreciation of the care and quality that goes in to making the cider and the cider brandy and all of that is confirmed on the tasting.

It really is a unique and relaxing place to visit and I highly recommend that you do drop by. Here is a link to their website.