What better way to celebrate English Wine Week 2018 than by letting you know about a small but quality Somerset vineyard – Greenhill Estate, on Stocklands Farm off the A39 between Bridgwater and Glastonbury.

Despite the recent appetite for English sparkling wines, and more recently English still white wines made from Bacchus, our reds have yet to prove as appealing.  Our northerly cool climate is not a happy place for red grapes to ripen as fully as they need to for quality red wines, and the most suitable international red grape,  Pinot Noir, is far too fickle for most to risk making still red wine with it as it only ripens enough in the very best years.  It is often earmarked instead for sparkling wine for economic reasons.  But as Aldwick have recently shown (see my Judgment of Winscombe piece), maybe it is high time that more producers took the risk.

Right on cue to prove my point, Kelli Coxhead very kindly let me join her in tasting a new potential wine for her shop, submitted by Mark Thorpe of Greenhill Estate – their Pinot Noir still red. 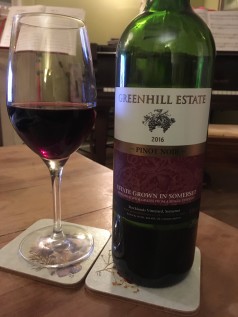 We tasted the 2016 vintage in January 2018.  Despite the winter chill, we noted a pronounced nose of red and blackcurrants, wild strawberries, violets, and a herbaceous blackcurrant leaf bite.  On tasting, although the wine had very light tannins and structure, it was balanced, with plenty of juicy currant and strawberry fruitiness to savour, as well as the herbaceous character we found on the nose.  We did not detect any oak derived flavours.  The finish was surprisingly and pleasantly long and it evolved from fruit to savoury flavours – indicating ripe and very good quality fruit, as well as skilful winemaking.  “Smiley face” award duly given.

It seemed to us that not only must the grapes have been fully ripe indicating an excellent aspect in our northerly viticultural extremity, but also, the grapes must have been of very good quality, probably with a low yield, to produce such surprising and evolving length.  I therefore resolved that I would visit the vineyard to see what advantages it had.  My visit eventually happened on a chilly overcast windy day in May 2018.

Small is beautiful, and the vineyard at 1 hectare in size is indeed small.  But it has an outstanding view across the Somerset Levels, being sited on a southerly slope in the Polden Hills.   Tending the vines must be a pleasure (in fine weather) with such a vista to behold. Not only does the slope enjoy plenty of sunshine, it is also sheltered, which means that the grapes achieve enviable sugar levels at harvest.  For 2017, the sugar levels were 87 for Pinot Noir, and 76 for Chardonnay, with acidity of 9.5 and 10.8 respectively.

However, the rest of the secret here is the soil, which is clay over layers of limestone.  Limestone is a recurring theme in the world’s best vineyards.  It is apparently thought that the Romans grew grapes on the Polden Hills.  I don’t know what evidence there is for that assertion.  We do know that by Henry VIII’s era there were vineyards attached to monasteries, including one at Pilton Manor belonging to the abbey at Glastonbury (these largely vanished when Henry VIII got rid of the monasteries) but I have not found reference to any others as yet.

Whatever our ancestors got up to, as of today, this site seems to have bags of potential, and as the vines mature and the estate gains in experience, the quality of the wines can only increase.

Stocklands is owned by farmers Steve and Julie Larder, who planted the vineyard in 2008 having carefully researched the soil and the vines to plant on it.  A quarter of the vines are Chardonnay, the rest being Pinot Noir (late not early ripening), planted in vertical lines running up the slope towards the farm. Details of the clones used have been lost.

The vineyard made an imposing entrance to the farm from the A39, but soon absorbed rather more time than anticipated. The wine produced in the early years showed little promise, and the vineyard became neglected.

The Larders then came across Mark Thorpe, a retired dairy farmer and latter day fencing entrepreneur from North Petherton.  When he gave up his fencing business, the Larders persuaded Mark to take on the vineyard, which he did in January 2014.  Mark freely admits that apart from liking a drop or two of wine, he had little idea of what would be involved.  He has therefore had a very steep learning curve.  He set about instituting a very strict pruning and management programme to ensure as open a canopy as possible to combat his primary viticultural hazards, downy and powdery mildew.  The trunks had been allowed to grow too tall and had to be cut back down, and the cost of hiring labour to undertake the work involved put him in debt right from the start.

The vines are pruned using a single Guyot system as in Burgundy, the classical home of Pinot Noir and Chardonnay.  Yields are low, and although 3.5 tons was achieved in 2017, the Chardonnay and Pinot Noir yields were equal – even though the vineyard area of Chardonnay is only a third of that devoted to Pinot Noir.  Mark therefore wonders whether his management regime might be a little too strict, noting ruefully that yields of at least 5 tons per hectare are said to be required in order to make a profit.

The path of true wine never runs smooth.  In 2014, Mark’s first vintage, both grapes were blended because no sane person makes red wines in England.  However, wine making sage Steve Brooksbank, who vinifies much if not all of Somerset’s grape output, persuaded Mark to keep a little Pinot Noir separate to test its potential.  The resultant still red won the Sunnybank Trophy for best red wine in the subsequent South West Vineyards Association competition, much to the chagrin of other larger more established producers.

A great start, but alas, in 2015, no still red wine was made.  The ancient sprayer borrowed from Steve which Mark had valiantly repaired, broke down at the vital juncture in mid May, so mildew ran riot.

In 2016, the grapes were vinified separately.  Sugar levels of 82 and 79 were achieved for the Pinot Noir and Chardonnay respectively.  The Chardonnay won bronze in the 2017 SWVA competition – although Mark suspects it might have fared better had he entered it in the dry, not the medium class!  The Pinot Noir Kelli and I tasted in January will be submitted for the 2018 competition, and also hopefully for Wine GB as well.  The cost and time involved in entering anything else such as the International Wine Challenge is prohibitive presently.  700 bottles of Pinot Noir and 1,500 bottles of Chardonnay were made.

In 2017, the yields were higher.  The Chardonnay is about to be released, and the Pinot Noir is still being matured.  It still needs to undergo malolactic fermentation, and in view of the cold weather thus far this year (despite odd bursts of record breaking warmth, such as the May Day Bank Holiday) this has been delayed.  Mark has yet to taste it but suspects it will be good as the grapes were even riper than 2016 (see above).  The wine won’t be released until August.

Mark modestly says he does not understand winemaking.  However, when I asked him whether the wines were chaptalised (i.e. sugar added) he firmly said no as that would be cheating – and the enviable sugar levels from these grapes surely make this intervention unnecessary.

When I asked Mark whether oak had been used, as regards the Chardonnay, he exclaimed that no oak whatsoever would be used while he drew breath!!

Likewise, no oak has been used for the Pinot Noir.  It was discussed, but for various reasons it was ruled out. The wine was therefore matured in stainless steel.

Sparkling wine is not made.  Why? Mark does not care for it.  Fair enough!

Mark admits that he will continue to learn by experience, and he gains much support and knowledge from the committed grape growing community in Somerset and beyond.  He would like to explore whether yields can be increased while maintaining quality, and he would like to widen the market for the wines to secure the financial security and viability of the vineyard for future generations.

Mark tells me that a further 4 acres of adjacent land with similar viticultural advantages would be very suitable for Bacchus, the rising star of the UK still white wine scene.  As demand for Bacchus grows, this could be a useful additional revenue stream.

Mark also has an eye on succession planning.  He seemed very hale and hearty to me, but none of us are getting any younger, and vineyard work can be heavy going.  Mark won’t be able to carry on in the longer term and needs to find a younger kindred spirit to foster these young vines into maturity to realise their full potential.  The work involves pruning throughout February each year, which he and his friend Francis undertake.  Mark then works in the vineyard 3 days a week throughout spring and summer, any spare time being taken up with marketing and administrative tasks.  It would be a crying shame if a site of such potential was to fall into ruin; some of you will remember nearby Moorlynch vineyard which ceased to be when its owners felt they could no longer carry on.

So whether you are a wine lover or wine growing wannabe, do get hold of Greenhill Estate’s wines.  Mark and I would love to know what you think about them.